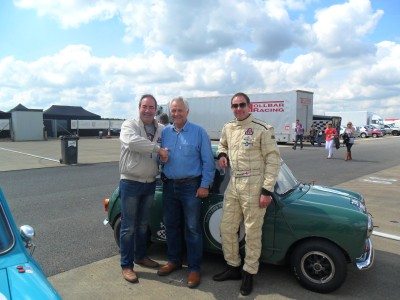 A classic car fan from Cambridgeshire had the time of his life after winning a competition recently. Paul Drinkwater, from Ramsey, secured a dream VIP day at the world’s biggest classic car motor racing festival, the Silverstone Classic, all thanks to the iconic oil brand, 3-IN-ONE. The prize was linked to 3-IN-ONE’s recent sponsorship of a brace of 1964 Mini Coopers for three-time Mini Miglia champion Andy Hack and Dan Wheeler, forming the 3-IN-ONE Classic Racing team. Paul, 60, took his father-in-law, Ken Wade, along for the ride as both were allowed to become part of the pit crew for the race team during the Silverstone Classic. The duo then enjoyed a full day of the sights and sounds of classic cars racing around the Grand Prix circuit, including Ferraris, Porches and 1960s Formula One cars. After lunch Paul and Ken then toured the numerous classic car shows and auctions before returning to help Andy and Dan prepare for their race. He said: “We both had a fabulous time and can’t thank everyone from 3-IN-ONE, plus Andy, Dan and the mini team. “Andy and Dan gave us some great tips on car control and driving in different conditions, so hopefully they will help hone my driving skills. “I regularly attend classic car events and the Silverstone Classic is the best of the best in my opinion.  “I’ve never been able to attend before because of my job commitments, but this year I was free, so winning the competition was a huge bonus. It’s the highlight of my year.”

As part of the prize, Paul will take part in a test session with the 3-IN-ONE team later this year, with Andy taking him of driving laps around Silverstone. Paul will get the chance to drive himself, but he’s unsure if that will happen. He added: “I’m really looking forward to taking part in the test session, although whether my driving will suit the mini and a race circuit is a decision I’ll make during the day. “I think the passenger seat might by the favoured option for me, so I can enjoy the thrill of travelling in a racing car with a professional driver.” During the race itself at the Silverstone Classic, the mini driven by Andy and Dan suffered mechanical failure while racing at the top end of the field, which the former put down to racing luck. Andy said: “It was great to see Paul display such enthusiasm for the mini and all classic cars during his time with the team.  “Dan and I are sorry we couldn’t bring success on the track, but that’s motorsport. “The competition has been a great way of showcasing the mini to the fans of classic cars and the sponsorship from the classic brand 3-IN-ONE has helped promote the team and everyone associated with it. “Everyone has had a can of 3-IN-ONE in their garage at some stage and everyone remembers the original Mini, so it is the perfect fit for us as a team and for the company. “We’re looking forward to seeing Paul again on the test session and show him just how fast the mini is around Silverstone.”

Kieron Roberts, assistant brand manager for 3-IN-ONE, said: “The competition has been a great success and we’re delighted that Paul and Ken enjoyed their time with the team. “3-IN-ONE is a classic brand and it makes sense to be involved in historic racing. “We’ve been able to support the team in many ways this year including with our complete range of products, and been providing expert advice on keeping the team’s equipment in tip-top condition throughout the season.  “I hope Paul and Ken take many happy memories with them from the day and continue supporting the classic car arena.”